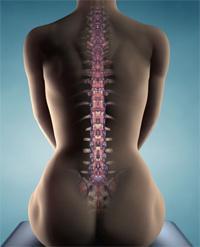 This condition is known as Herniated Nucleus Pulpous (HNP). Degenerated disc weakens the outer layer of the disc which is called Annulus Fibrous. The inner jelly-like core is called the Nucleus Pulposus. With progressive degeneration, the nucleus Pulposus leaks out, depleting the disc of its nutrients. This concept is known as herniated disc or disc herniation.

The sciatic nerve is the longest nerve in the body and it is formed by 5 nerve roots, also called spinal nerves. These are L4, L5, S1, S2 and S3 nerve roots. These are nerves that come out directly from the spinal cord. "Sciatica" occurs as a result of compression of 1 or 2 of the spinal nerves that form the sciatic nerve. This condition causes pain from direct pressure on the nerve and most often affects the back, buttock and legs. The leg pain is also called radiculopathy. The lumbar and sacral regions of the spine are more prone to disc herniation which give rise to approximately 90% of the radiculopathies. The most common discs include L4-L5 and L5/S1, resulting in pain in L5 or S1. With progression of the herniation, pain intensifies in the back and leg. Sometimes patients experience pins and needles and numbness along with the pain.

Herniation occurs at various degrees. The mildest form of disc hernaition is disc bulging. This is associated with mild pain and does not require any intervention. Non-surgical treatment is offered for moderate to severe herniation. These include Non steroidal Anti-inflammatory (NSAID) and physical therapy. Facet and steroidal injections are used to treat pain from caused from Herniated disc.